The office is staffed with 63 total employees and 31 sworn officers. Deputies patrol 151 square miles and serve nearly 27,000 residents. They also patrol I-75, one of the longest continuous six-lane freeways in the United States with two Peach County exits.

Sheriff Deese started on patrol and worked in investigations, narcotics and basically everything but the jail. He served as chief deputy for about 20 years before being elected sheriff.

A Personal Message from the Sheriff 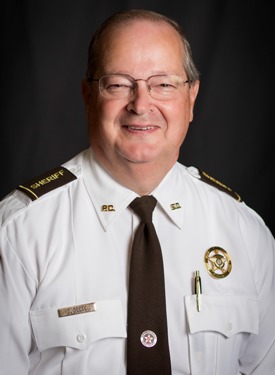 It has been an honor and privilege serving this community in the Sheriff's office since 1983, and I humbly accept the challenge you have offered by electing me as your Sheriff. I grew up in this community and I believe I have the knowledge and experience to provide you with first class law enforcement services.

Events of the past several years have brought new concerns to law enforcement agencies and the communities they serve. Even more so than ever before, law enforcement and the community must work together to protect everyone from those who would commit crimes against us or do us harm. We rely on your eyes and ears as much as our own. We need your help, and I ask you to report crimes and suspicious activity when you see them so that we can do our very best to keep this community a safe place to work, play, live, and raise our families.

My door is open to everyone. I want to know what you consider important and necessary to keep ours a safe community. Our department has always strived to attain the highest professional standards while remaining accessible and helpful to everyone in our community.

I deeply appreciate your support and look forward to working together with you to help Peach County be all it can be.

In light of the seriousness of the Coronavirus COVID-19 pandemic, the Peach County Commissioners have declared a local state of emergency requiring extraordinary and immediate corrective actions for the protection of the health, safety and welfare of all residents of Peach County. This state of emergency is effective March 24, 2020, at noon and will continue until April 6, 2020, unless modified by subsequent order.

The following actions are effective immediately:

CLICK HERE FOR ALL CURRENT INFORMATION REGARDING THE COVID-19 CRISIS